With the goal of bridging scientific research and the general public, the Miller Lab is committed to community engagement and public outreach. Together with our collaborators we have developed exhibits and regularly staff events at the St. Louis Science Center (SLSC) and Missouri Botanical Garden (MOBOT). We also participate in public events at the Danforth Plant Science Center. We volunteer around the St. Louis region and talk about our research in plant conservation, crop improvement, and sustainable agriculture whenever and wherever possible!
Grafting the Grape Exhibit - Missouri Botanical Garden
July 2021 - March 2022

The Missouri Botanical Garden's Stephen and Peter Sachs Museum is hosting "Grafting the Grape", an exhibit highlighting the role of Missouri and Midwestern grapevines in global viticulture. This amazing exhibit combines art and science to show how these perennial vines are actually composites of different species, one which is used for the above-ground part of the plant (scion) and the other is used as the below-ground part of the plant, the rootstock. While the scion is often a European species or a hybrid between European and North American vines, grapevine rootstocks are derived exclusively from native North American grapevines, many of which occur in Missouri.

Update: Check out this amazing movie about the exhibit! Made by the very talented Orlando Thompson https://youtu.be/m8hWn_mmS5k 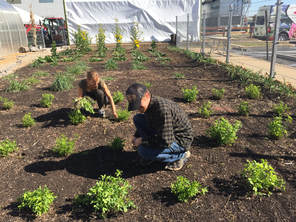 The St. Louis Science Center GROW exhibit features many indoor-outdoor displays on the growth, production, and processing of food. As part of the exhibit, the Miller Lab constructed a plot for three perennial species with domestication potential: silphium, kernza, and alfalfa. The plot is intended to teach the public about perennial species and their benefits, such as multi-year growing seasons and deep root systems that contribute to soil health and environmental stability. The species we chose to highlight represent three different food "types," with silphium being developed as an oilseed, kernza as a grain, and alfalfa as a legume.  In addition to regular maintenance of the plot, Miller Lab members attend various public events happening at the GROW exhibit to show attendees around the plot and talk about perenniality as it relates to sustainable agriculture. 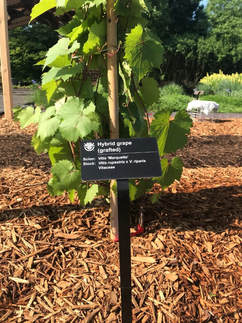 MOBOT Kemper Center
​"Building a Better Grapevine" Exhibit
May 2018 - Present
​
The most well-known grape used in winemaking, Vitis vinifera, is native to Europe and southwestern Asia. When European settlers arrived in North America, they tried to cultivate European grapes, but pests and pathogens doomed most early attempts. Fortunately, there are 19 species of Vitis that are native to North America. These species have played a critical role in adapting the European V. vinifera for cultivation in North America and elsewhere through two horticultural techniques, hybridization and grafting. At the Kemper Center we have a display vineyard to showcase grafting and hybridization in European and American grapevines, including hybrids Marquette, Vignoles, and Traminette and commonly grafted V. vinifera varieties Cabernet Sauvigonon and Chardonnay. We use the display vineyard to exhibit differences in growth between grafted, ungrafted, hybrids, and non-hybrid grapevines. 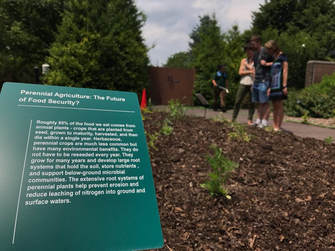 Missouri Botanical Garden Perennial Agriculture Plot
June 2017 - present
​
The Perennial Agriculture Project Global Inventory aims to identify all perennial, herbaceous members of the grass, legume, and sunflower families. Two goals of this project are to assess natural variation in these plant groups and to identify a short list of perennial, herbaceous species that might be good candidates for crop development.  As part of this project, we established a display garden in the George Washington Carver Garden at the Missouri Botanical Garden in order to highlight the role of natural plant variation in the development of new crops. Our plot in the Carver Garden showcases perennial, herbaceous legumes and grasses. Accompanying signage describes the role of perennial, herbaceous plants in perennial polyculture agricultural systems. This project is funded by The Land Institute and Saint Louis University.
​
Volunteer Day with Gateway Greening
October 2017

As part of SLU's annual "Make a Difference Day," the Miller Lab volunteered with the local non-profit Gateway Greening at one of their many St. Louis-based community gardens. Gateway Greening, in addition to their support and development of community gardens, hosts tons of educational events about gardening and sustainability. We weeded, reconstructed several overgrown beds on the plot, and very much enjoyed our time with the garden leader and local artist Andy Cross. Read more about our experience on this blog post. 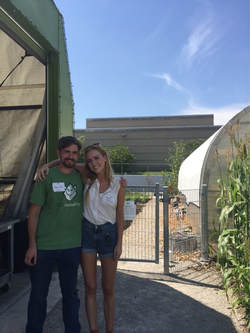 PhD student Sterling and Research Assistant Emma attended the SLSC "Roots" event with members of Chris Topp's lab from the Danforth Plant Science Center to teach the public about root systems in plants. Sterling and Emma set up a booth outside our perennial crop plot with alfalfa ready for harvest. They showed attendees how to harvest alfalfa seeds, talked about perennial root systems, and walked people through the plot. Plus the treat of the day was root beer floats!
Proudly powered by Weebly